A DUI charge has the potential to alter your life dramatically. If you are convicted of driving while intoxicated in Los Angeles County, the penalties may include hefty fines as well as jail time.

Also, you may lose your driving privileges and depending on the policies of your employer, your job has the potential to be affected in this situation as well. This is why it is important to consult with Beverly Hills DUI Attorneys Michael Karagozian and Allyson Rudolph as soon as possible following your DUI arrest.

What is a DUI?

It is illegal to drive a motor vehicle while under the influence of drugs or alcohol. This implies that your physical and mental capabilities are impaired enough that you are unable to operate a vehicle safely.

DUI charges affect a large number of individuals in Beverly Hills and throughout Southern California, particularly because drivers get behind the wheel after drinking too much alcohol.

However, if there is evidence that you were driving impaired, dangerously, or erratically but were under the legal limits listed above, you may still face DUI charges. The prosecution may argue in this instance that even though your BAC was not as high as the legal limit, your driving was still unsafe while you were under the influence.

A DUI is a serious criminal charge that may result in significant penalties.

A first DUI conviction for drivers 21 years of age or older can include a sentence of probation, license suspensions, alcohol program, up to six months in county jail, fines, and other penalties.

A second or subsequent DUI conviction can result in more severe punishment, which could include longer probation, more jail time, longer alcohol program, longer license suspensions, higher fines, and other penalties. A felony DUI conviction can include a sentence of 16 months, two years, or three years in state prison, as well as fines, license suspensions or revocation, mandatory DUI school, and other penalties.

To determine if an incident will be charged as a multiple DUI offense, a previous drunk driving incident can be used as a prior if it was within the past ten years. Therefore, even if a significant amount of time has passed since the previous offense, if it is within ten years, the new arrest will be considered a second DUI offense, despite the length of time that has passed.

At our law firm, our attorneys will conduct a comprehensive analysis of your situation. Karagozian & Rudolph will examine every piece of evidence in your case. The legal framework lays out specific conditions under which police must conduct the arrest proceedings before, during, and after the arrest. As your DUI defense attorneys, we safeguard against technicalities and anomalies such as:

What to expect after an arrest in Beverly Hills

In Southern California, you may be arrested for a DUI and released on a promise to appear and given a citation with a hearing date. Bail may be required in some cases, and then you must post bail or remain in custody until you appear before a judge.

There are two distinct proceedings triggered after a DUI arrest: the criminal prosecution for driving under the influence and the DMV administrative action. Within ten days of your arrest, you must request a DMV hearing. Otherwise, your driver’s license will be suspended after 30 days.

With a skilled DUI defense attorney on your side, you may be able to identify possible defenses to your charges.

Certain defenses to DUI charges could include:

We know how overwhelming this may all be if you have never been arrested for a DUI before.

That is why our DUI attorneys Michael Karagozian and Allyson Rudolph are here to help you. At our law office we will aggressively fight your charges with a team of knowledgeable, experienced, and dedicated defense attorneys on your side. Your best interests are our main priority when we represent you. 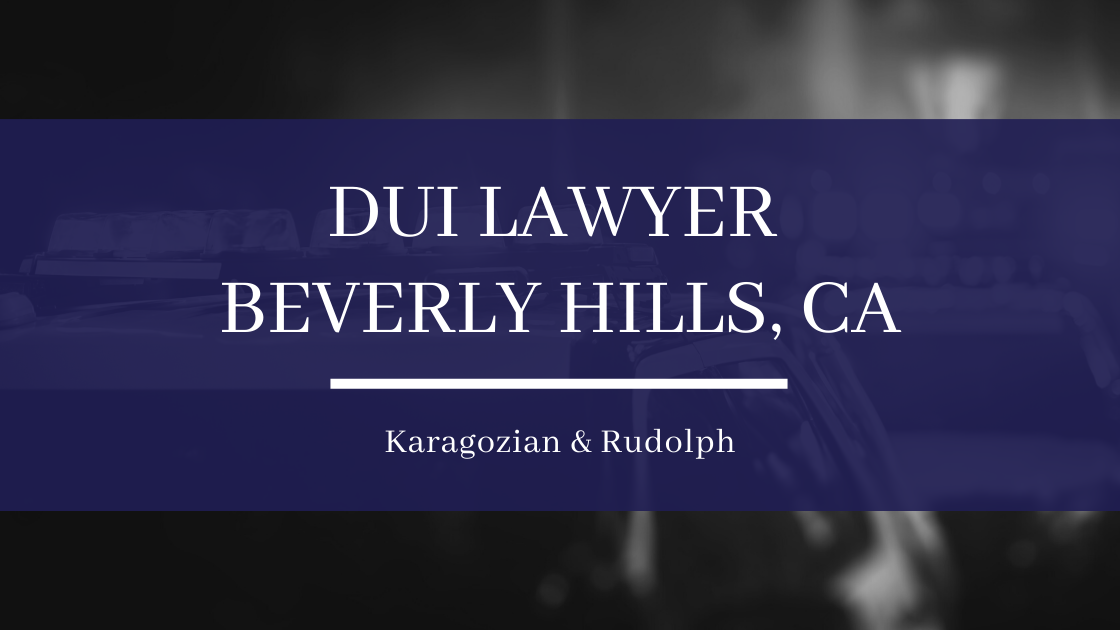 Get in touch with us at Karagozian & Rudolph, PC in Los Angeles, CA

Looking for a DUI Defense Attorney in another city?